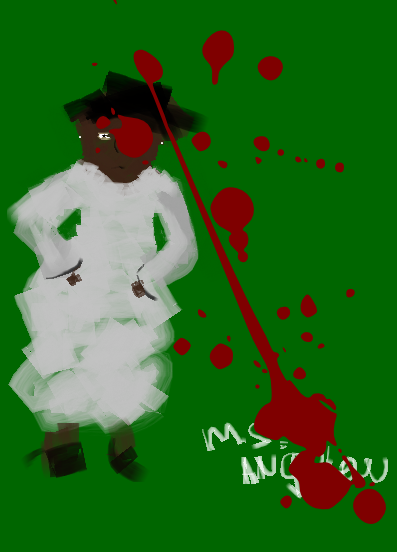 This Grimoire is the property of Ms. Angelou, a native of the MacGregor-controlled region. If found, it is to be kept in a locked bookcase so that its sinful contents will not be inflicted upon another blameless victim. The picture is a self-portrait, drawn in my youthful years.

In recent days I’ve grown restless in my daily occupations. Inspired by stories of old I’ve struck out to create a grimoire detailing the practice of blood magick & culinary spells.

Day 4529:
The streets are filled with guitar’s music, weaver’s workers toiling hard to process textiles of the finer sort. I’ve found my occupation in the kitchen. The MacGregors are a kind and hardworking people who are eager to see their citizens grow into prosperity.

Day 4614:
The practice of cooking human flesh is no simple matter. I don’t know what the best source would be.

Day 4625:
The spirit of young Lind haunts the mountains. Lacking beeswax, there’s little I can do to rid my would-be home of this spectral curse. Perhaps it was foolish to thrust myself fully (willingly, indeed) into the hands of a man driven by greed for gold. That is what the MacGregors called my master Novus Loreis, a greedy man who could not be trusted. They trusted me, and in turn entrusted me with a stationcar to travel safely and independently.

Day 4635:
I cannot forget the savages my friend Radnaax Kilmaar has fallen in with. I wonder if I can help him somehow. I’ll light up herbs to guide him away from a people lecherous and most vile, driving monstrosities of metal that spit foul smelling petrol fumes. One day they’ll be served a swift and violent justice, but I must collect my powers for deeds far greater indeed.

Day 4679:
Assembling ingredients for a potion. That large town of Klojt had a pleasant variety for sale. Unfortunately still no rice. Without it I cannot do my cooking.

Day 4684:
We’re in some forsaken mountain town. Mr. Loreis is truly a business-minded gentleman. Without him I would surely be useless. These mountains are full of creatures. I sense them wandering, craving heard so loudly: wolves and leopards lurking, skulking in the shadows of their gloomy caves. How dare they encroach upon our human territory?

Day 4689:
We, Ceti Spring and I, murdered Michael Leventhorp, the greedy leader of this mountain town. Master Loreis was wronged and attacked by him, and we had no other choice so we murdered him while Mr. Loreis was out of town. My hands are covered in blood– I dare not wash them. It’s ill, it’s vile, and each deed has its price to be paid. Success. That is what we aspire to, us murderers of the previous masters of this dragon’s nest.

Day 4726:
My interests in the occult have not waned, but I’ve had little opportunity to explore the magick of blood & culinary spells. This is due to my occupation within the company, organising the kitchen and headquarters, recordkeeping of our storages, et&. I am currently undergoing a change of apparel, to appear more approachable towards potential customers.

Day 4841:
We’re in preparation of a feast. Dragonloft has grown significantly in recent years. I’ll have them all spellbound: they need but taste of my blood sausage, dried livers or steamed pork– For they will feast of Mr. Leventhorp’s rotten flesh! The streets are lined with shops by my magic; visitors step inside Marco’s Marvels, the Golden Dragon inn, and Spectrum Boutique enchanted not by mere force of commerce, but far more ancient powers of blood magick.

Every success comes at a price; this is the price of blood and rice.

Day 4860:
I suspect Marco of being a homosexual. Naturally, this is accompanied by worries about his mental and physical health, and the town’s economy. Hopefully it won’t frighten the customers, who might preferably see in him something of an endearing male whose neutered passions form no threat even to helpless females. Homosexuality continues to be a mystery to me. Men and women have a distinct and separate taste, but some don’t adhere to important social boundaries.

Day 4866:
My latest experiments in the kitchen have led up to the unfortunate result of a botched spawning; some wolf come crawleth out of the ether. HOW FOUL its ragged breath– what sickening creature is THIS? I shall want it bound by magic, lest its unearthly powers transcend what little grasp I have on the mortal world: NO, let it feel each lick of my whip and know: each bone picked clean for dinner-time, for no waste in Ms. Angelou’s kitchen.

Day 4926:
My health deteriorates, despite each draught of Ceti’s blood mix’d with mountain’s herbs. Ground up a tooth that oughtn’t be missed, plucked out an ear’s hair right with my fist, locked up the blood that I oughtn’t have kissed. There’s been questions regarding the corpses– I fear we shall have to bury them soon, lest their conclusions lead up to the occult’s doorstep. (I shan’t open!)

Day 4953:
Yesterday’s feast a success, but the youth has questions! What, do they doubt the pristine history of Dragonloft? Why, they are correct, but let them taste of a sausage… ’tis of Ceti’s flesh drawn. INDEED: The hog referred to, my accomplice of crimes in history past, not swine of the pink flesh (imported, also, through the trade routes leading down to the city). How civilised our commercial district, you say, while chewing on Ms. Spring’s agèd flesh!